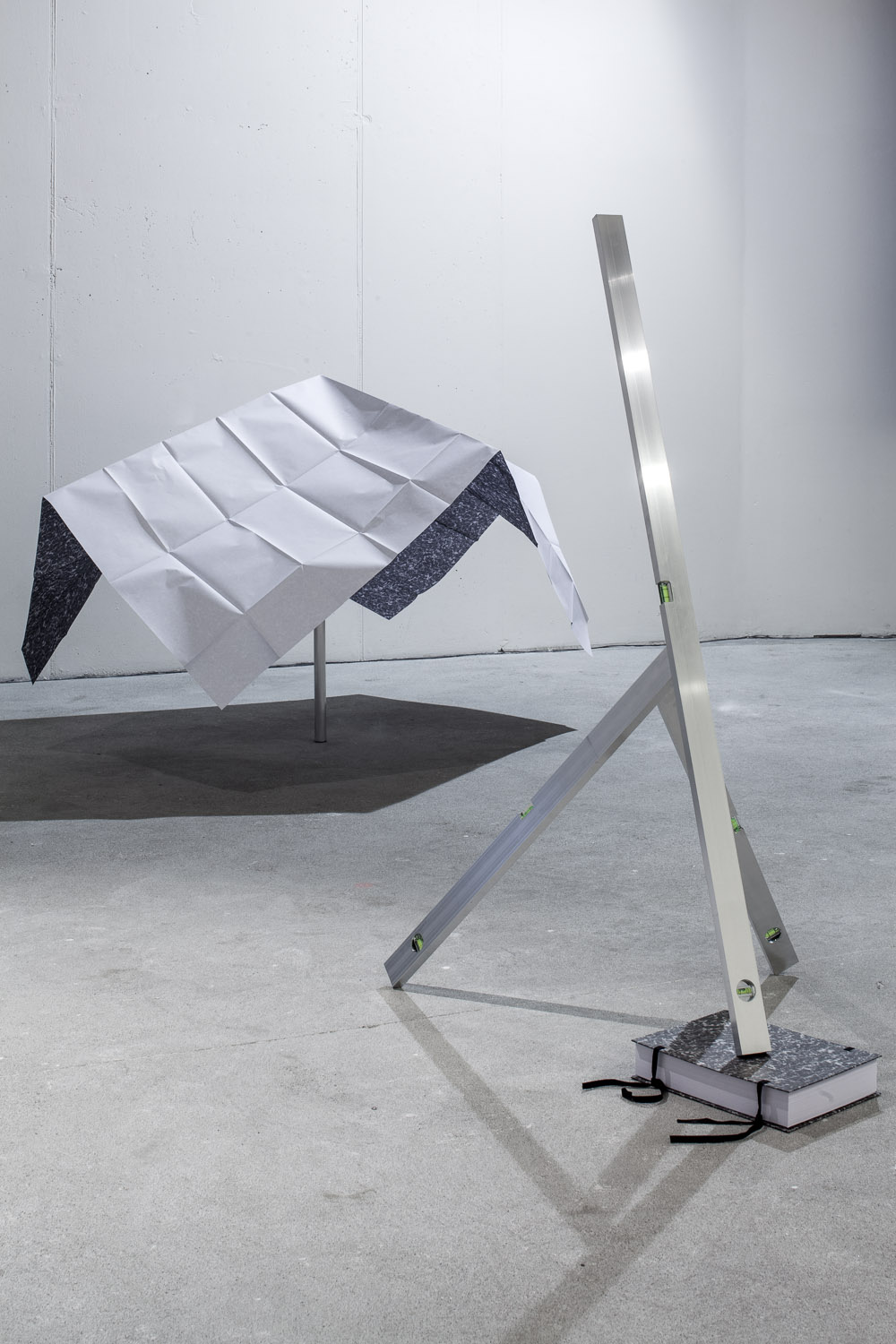 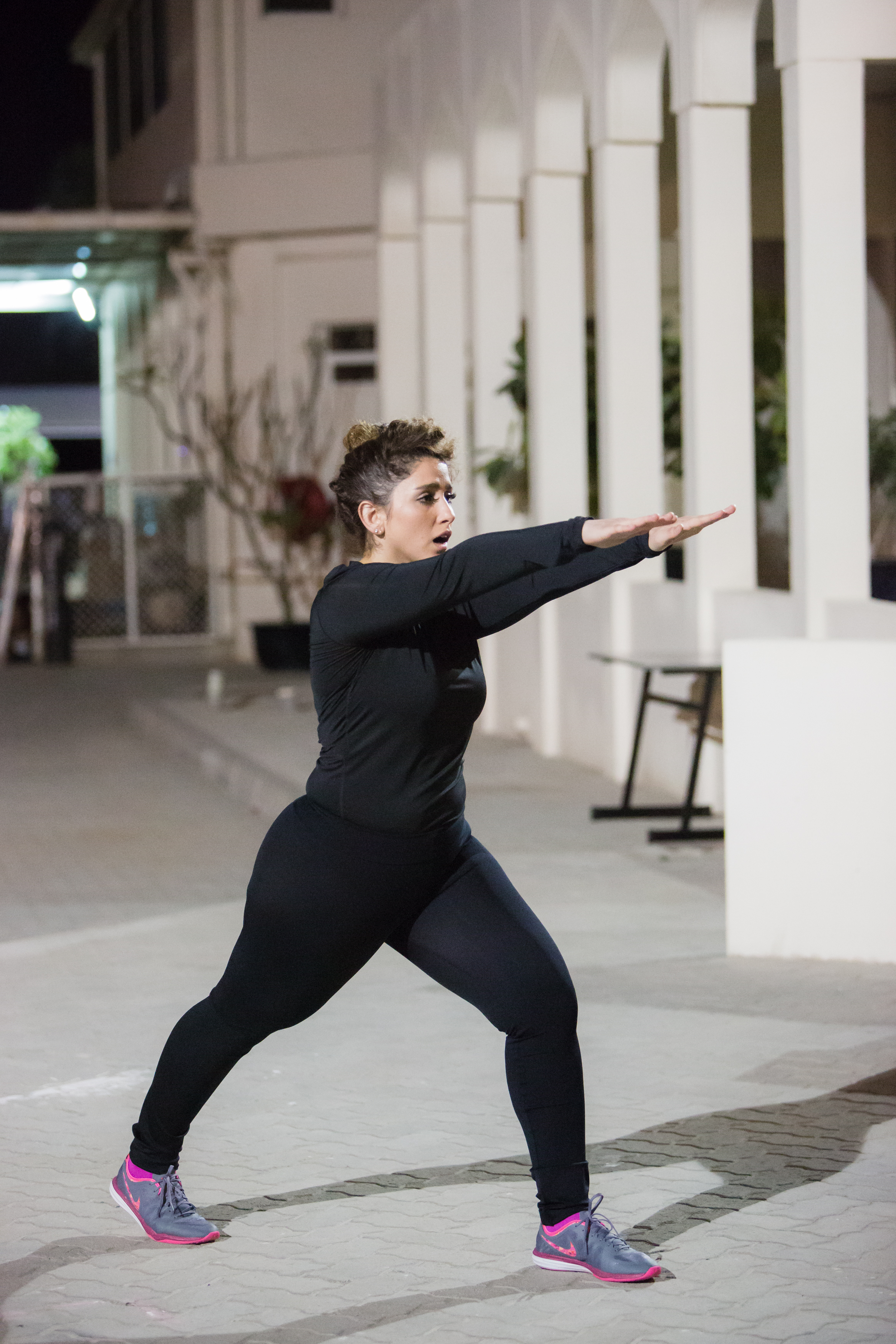 The International Studio & Curatorial Program announces the opening of women boxed, an exhibition of work by Ground Floor artist Elaine Byrne in ISCP’s Project Space. women boxed is a three-channel video installation that invites dialogue about how women’s labor is viewed in society, using the magic trick of sawing a woman in half as a pivotal metaphor.

Byrne observes, “The world of magic has been dominated by men, where the magician actively drives the story and the female assistant functions as a spectacle for the male gaze. The magician’s assistant brings the action to a stop and captures the spectators’ attention—she freezes the flow of events for moments of erotic contemplation.” Evoking ever-present gender inequality, the female assistant plays the role of victim. She is a woman literally encased in a box, seeming to await her fate. In actuality, the female assistant is largely responsible for the success of the trick, but her labor is hardly recognized. One of Byrne’s three videos was recently filmed on location at the Houdini Museum in Scranton, Pennsylvania, where the artist filmed the renowned female magician, Dorothy Dietrich. The first woman to saw a man in half, Dietrich speaks about her role as a female magician in a male-dominated industry. At a time when women continue fighting for many freedoms and equalities all over the world, women boxed alludes to these struggles through the arena of magic and illusion.

Elaine Byrne (born in Ireland and currently based in New York) examines overlooked histories, historical texts and artworks as a platform to mobilize history relating to current social concerns. Byrne received her BA from University College of Dublin, and her MA in Visual Arts Practices from IADT, Dublin (2009). She completed the Whitney Museum of American Art Independent Study Program (2015). She has had solo shows at Kevin Kavanagh Gallery, Dublin; Montoro12, Rome; Limerick City Gallery; Oonagh Young Gallery, Dublin; and Atrio Cultura Space, Mexico. She was the winner of the 8th Arte Laguna sculpture prize (2014) and T.I.N.A. prize (2015). Her work is in permanent collections including: the Philadelphia Museum of Art; the Rosenbach Museum and Library, Pennsylvania; Office of Public Works, Ireland; The Department of Foreign Affairs, Ireland; and PWC, London, England. She is represented by the Kevin Kavanagh Gallery, Dublin, Ireland. 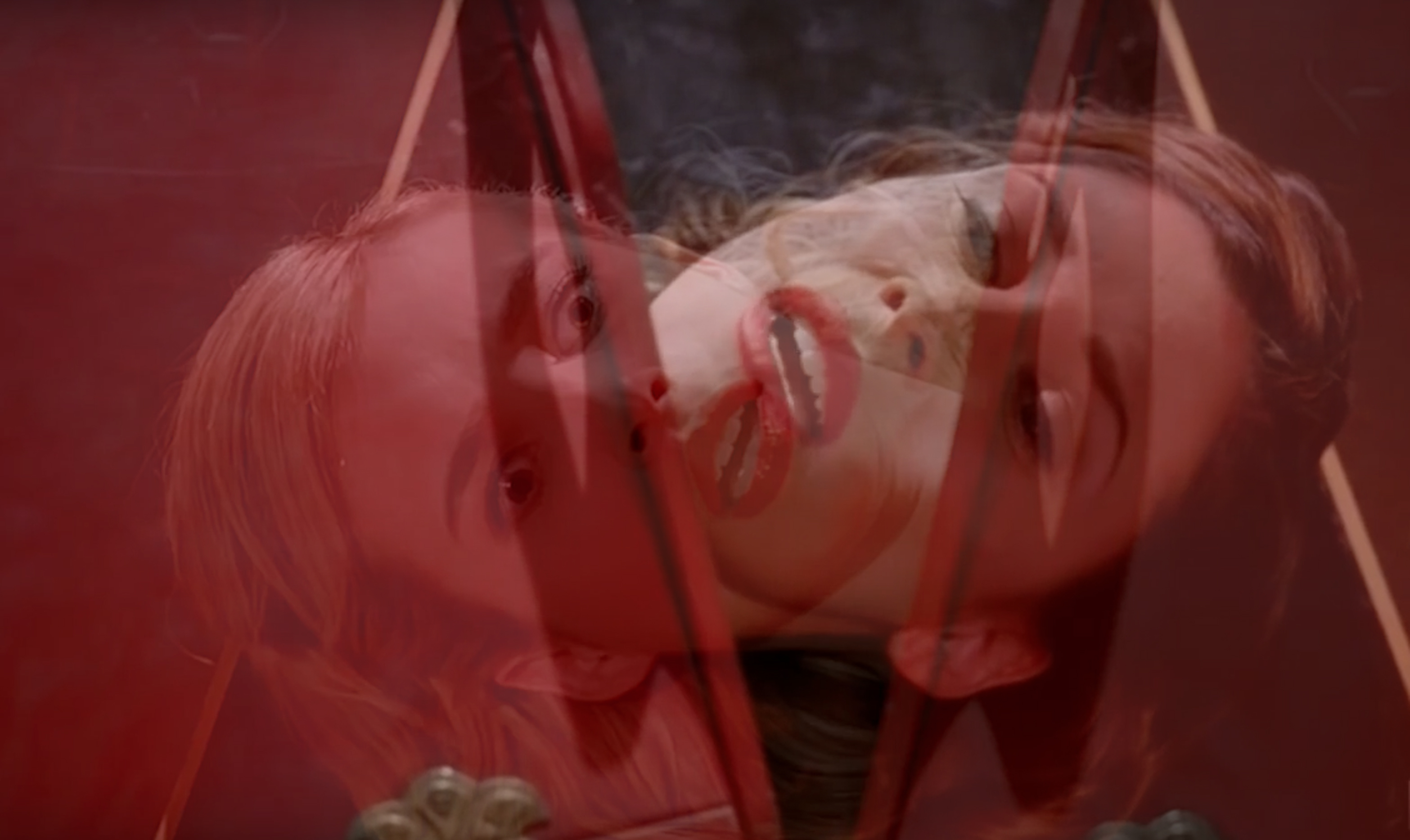 ISCP announces a presentation of work by French/Iranian artist, Ghazel, a 2001 ISCP alumna. Mismappings is the artist’s first solo exhibition in the United States, and includes recent Marée Noire and Dyslexia drawings, a video triptych from the Me series, and a new Road Movie performance that deals with issues of immigration and borders and that took place during the opening reception.

Mismappings focuses on issues of migration, exile, transnational identities, expulsion, discrimination and displacement. Ghazel’s work addresses the political aspects of representation, which relate closely to her personal history. Since leaving Iran during the Iran-Iraq War in the 1980s, she has navigated between Tehran and Paris for over thirty years.

Interested in radical cartography—an activist approach to mapping—Ghazel’s Marée Noire and Dyslexia works use ink and pen to erase the national borders indicated on Iranian-produced world maps. Clear and direct, more than twenty of these works on paper are shown in the exhibition. In gestural marks, the artist covers the national flags on the maps with black ink, and incorporates drawings of tree roots, suitcases and houses, illustrating the uprootedness of many people caused by political and social forces. In another video work in the exhibition, the artist documents a performance she made in a domestic space, where she folds and throws 51 paper airplanes made from world maps. Her mechanical and repetitive folding is shown in real-time, and a pile of paper planes gradually accumulates in the room.

Also included in the exhibition is a video triptych from Ghazel’s ongoing Me series. Begun in 1997, and currently comprised of over 730 minute-long scenes, the videos document the artist going about daily activities dressed in a chador, with accompanying captions written in the first person. Ghazel is the sole performer in each scene, which show her as a busy, active woman in diverse contexts and engaged in pursuits such as swimming, ironing, sleeping, crawling and reading next to an army tank, all in a humorous slapstick style. Several of the scenes on view were filmed in New York City during Ghazel’s ISCP residency, and deal with local issues from that time. While the work references Ghazel’s own in-betweenness as someone living in both the East and the West, it also points to universal issues of humanity. As the artist enacts the everyday scenes in the videos, the chador suggests she could be any Iranian woman.

Ghazel (born 1966, Tehran) is a pioneer in video and performance art from Iran. Her work has been shown extensively around the world since 2000, including at the 50th Venice Biennale; the 8th Havana Biennial; Hayward Gallery, London; Centre Pompidou, Paris; MAC Museo de Arte Contemporaneo, Santiago and Musée d’Art Contemporain de Marseille. Ghazel’s work is in the permanent collections of the Centre Pompidou, Paris; MUMOK, Vienna and Cité nationale de l’histoire de l’immigration, Paris.

A catalog for Mismappings is forthcoming in April 2017, which will include an essay by Hamid Naficy, Sheikh Hamad Bin Khalifa Al-Thani Professor in Communication, Northwestern University.

This exhibition is supported, in part, by The Andy Warhol Foundation for the Visual Arts, Greenwich Collection Ltd., New York State Council on the Arts with the support of Governor Andrew M. Cuomo and the New York State Legislature and New York City Department of Cultural Affairs in partnership with the City Council. 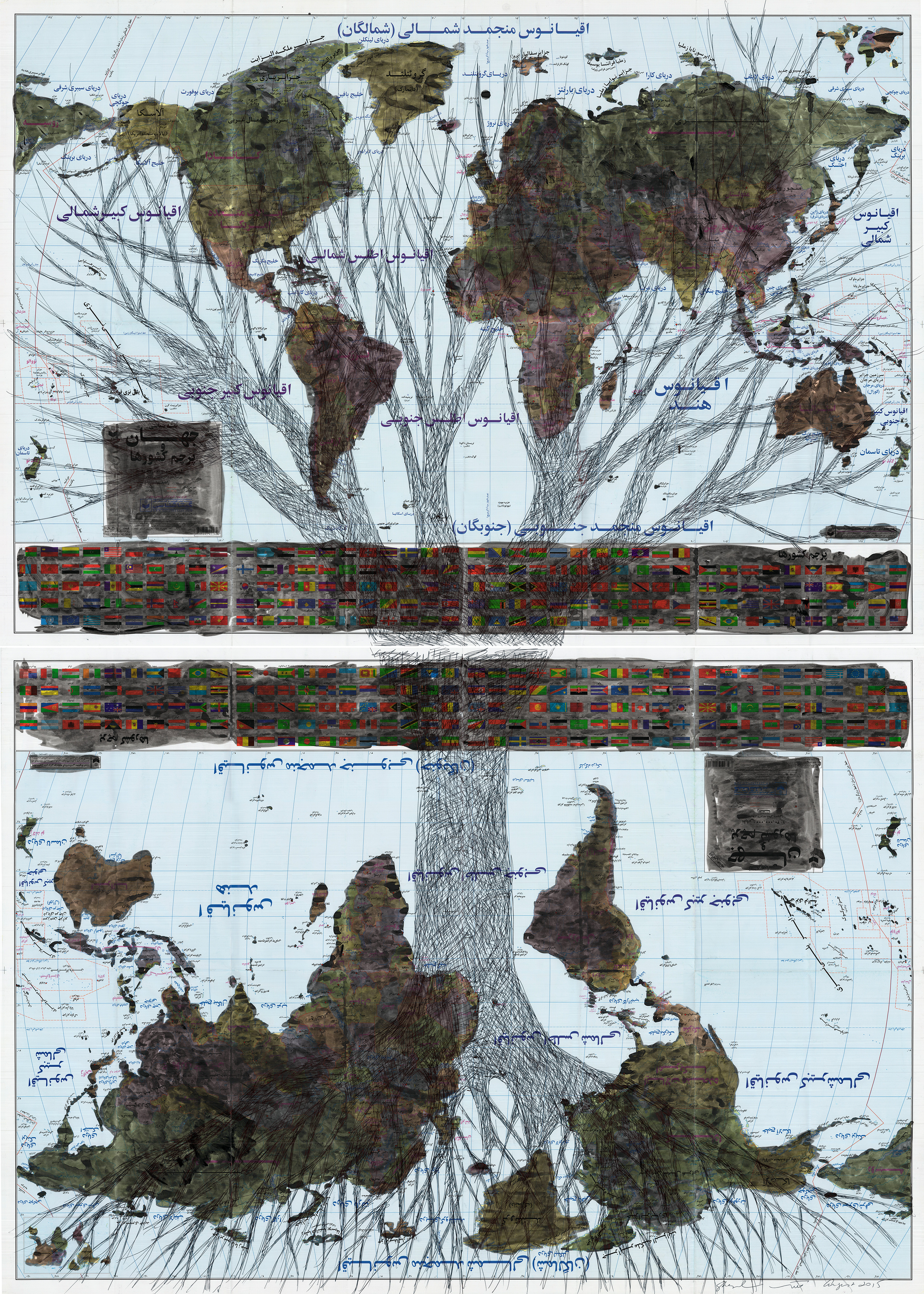 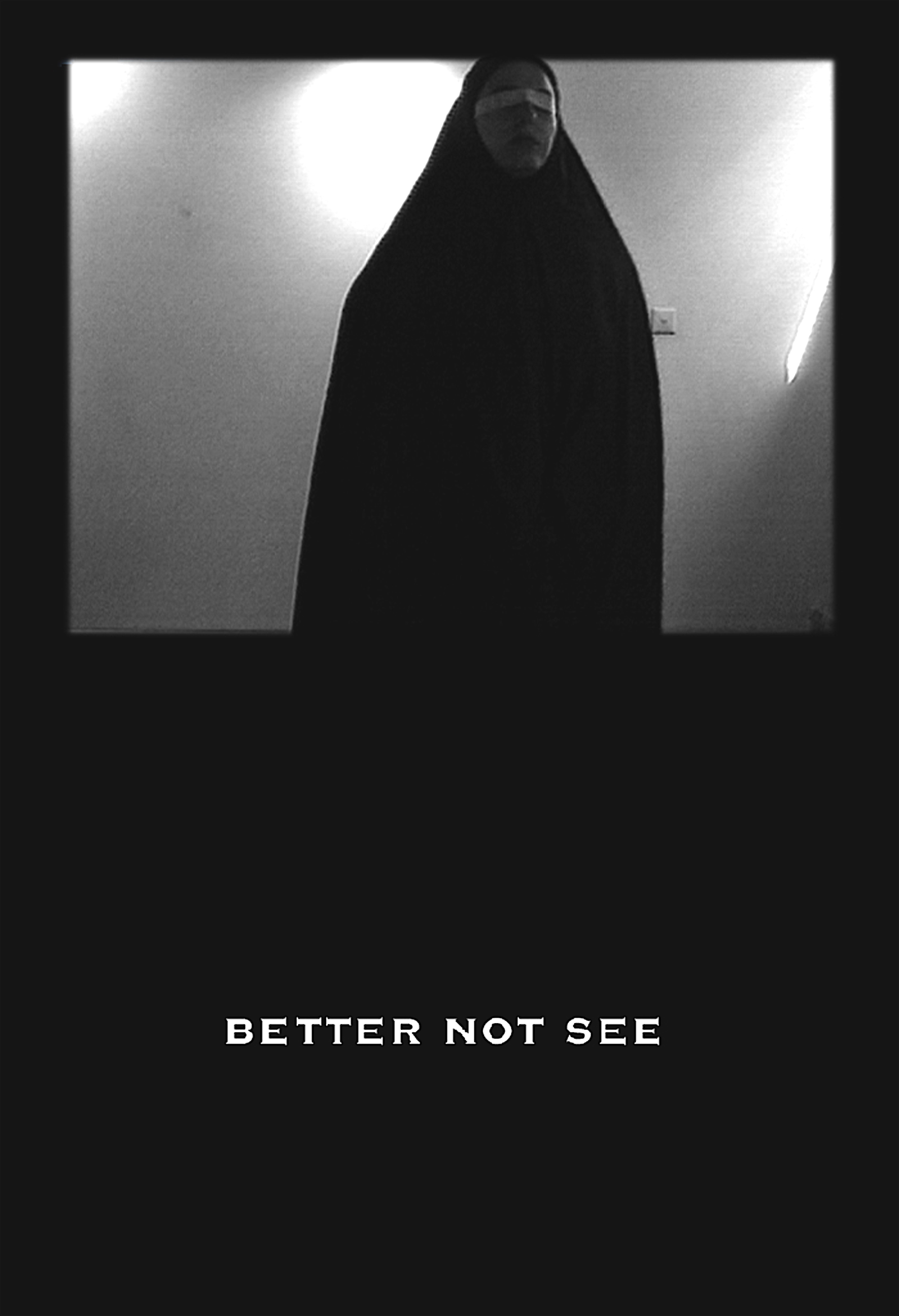 Ghazel, Better Not See, still from 'Me,' 2000–03, Triptych video installation with color, black and white, and sound. Courtesy of Ghazel and Carbon 12, Dubai.