Simón Arrebola uses painting and drawing to express events through an unusual way of conceiving space and time. These elements are essential in every act of telling stories. To build the arguments, Arrebola starts from those memories or experiences that live in our mind or arrive to us as a product of a foreign stimulus. Memory and its mental images are the origins of these stages and coexist with traditions and mythical legends. His conception of landscape is a kind of nature with an evocative character where the spaces talk about people and other times and the characters hybridize with the space that exists around them.

Simón Arrebola was born in Spain in 1979. He studied Painting, Engraving and Design at the University of Fine Arts in Seville. He received his MFA from Seville University in 2011. Arrebola has exhibited his work at Isabel Ignacio Gallery, Seville and Ángeles Baños, Badajoz. He also took part in the 3rd Mediterranean Biennal in Tunis. Arrebola won the Focus Abengoa Painting Award in 2008 and received an Iniciarte grant by Junta de Andalucía in 2009. He is one of the 2013 recipients of the “Sevilla es Talento” Grant, sponsored by Valentín Madariaga Foundation and ICAS. His work is in the collections of the Valentín Madariaga Foundation, Seville University and Focus-Abengoa Foundation. 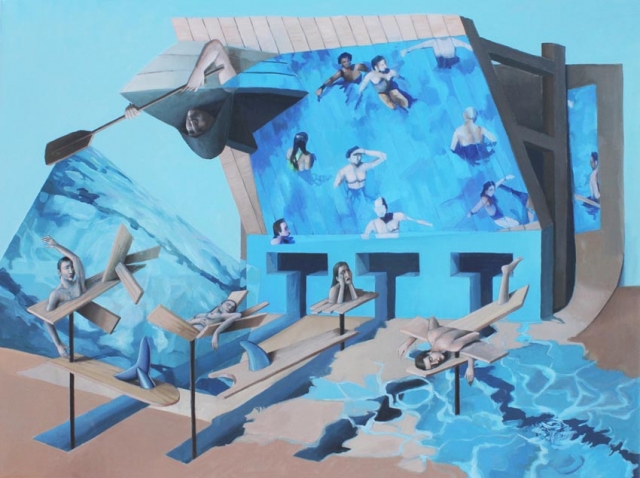 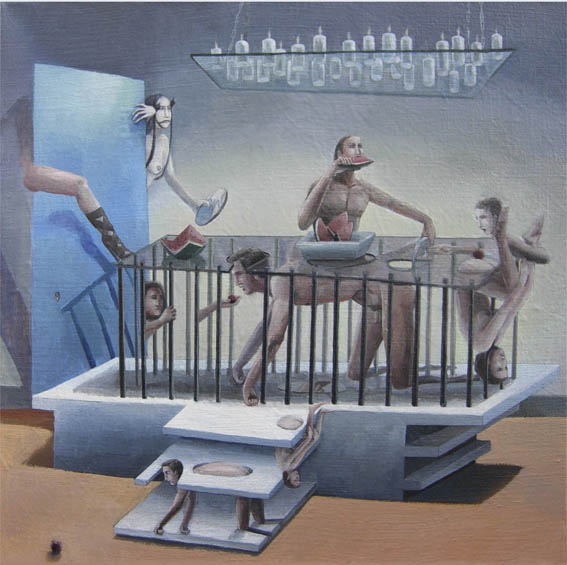 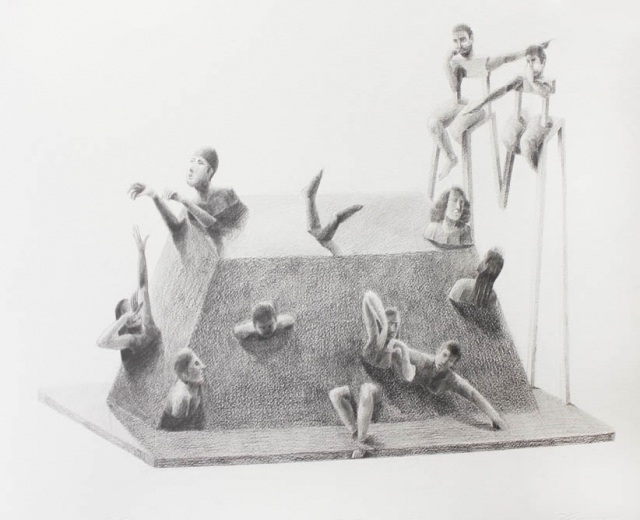 Simón Arrebola, The Swimmer - Scene VIII, 2012, Graphite on paper. Courtesy of the artist. 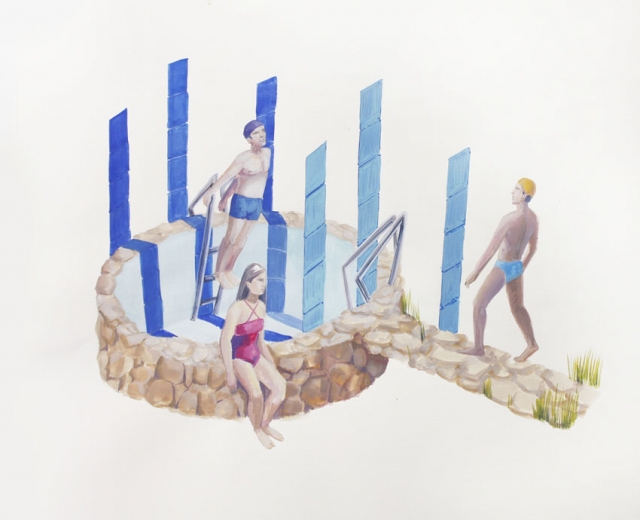 Simón Arrebola, The Swimmer - Scene X, 2012, Gouache on paper. Courtesy of the artist. 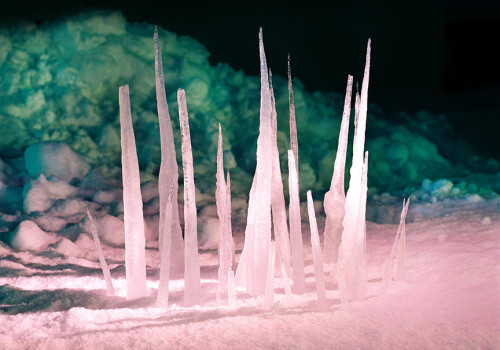 Bundith Phunsombatlert reflects on ever-changing social, economic, and political situations, particularly in the framework of globalization. Carefully considering the history of a culture or a place, he analyzes and synthesizes these situations in order to develop artwork that reconsiders Thai identity. Through media installations, he designs systems for sharing and communicating that explore the transformation from fact‐based orientation to imagination. This parallels his transformation as an artist working in the East and the West as well as his move from traditional to new media. Furthermore, it demonstrates a transmodal transformation that he argues is inherent in new media.

Bundith Phunsombatlert (born 1972) earned his BFA and MFA degrees in printmaking from Silpakorn University, Bangkok. He also earned an MFA in Digital Media from the Rhode Island School of Design. He has participated in various international exhibitions, such as the Third Asia-Pacific Triennial of Contemporary Art 1999, Queensland Art Gallery, Brisbane; the 12th International Symposium on Electronic Arts, Kiasma Museum of Contemporary Art, Helsinki; The Third Guangzhou Triennial 2008, Guangdong Museum of Art, Guangzhou and The 4th Auckland Triennial 2010, Auckland Art Gallery. Among his selected awards and fellowships are the Pollock-Krasner Grant in 2001, the Second Prize UNESCO Digital Art Award from ISEA 2004, and the Asian Cultural Council Fellow in 2007. 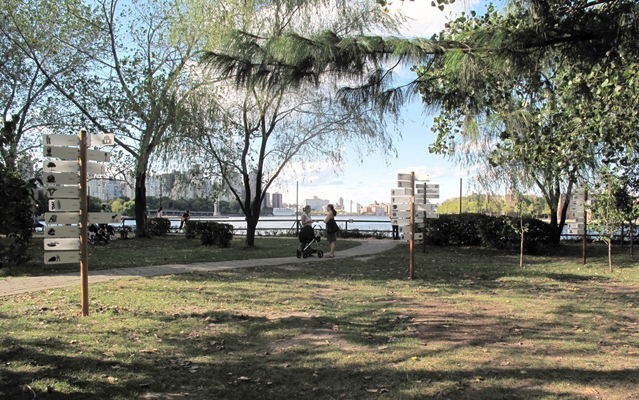 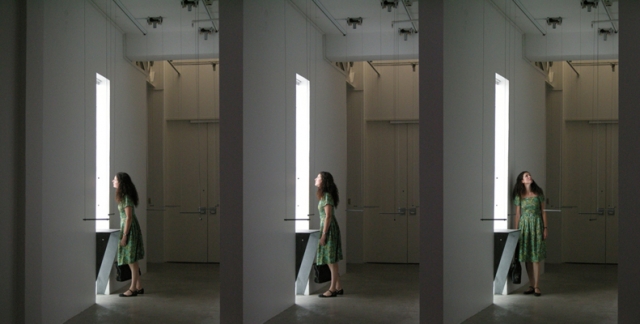 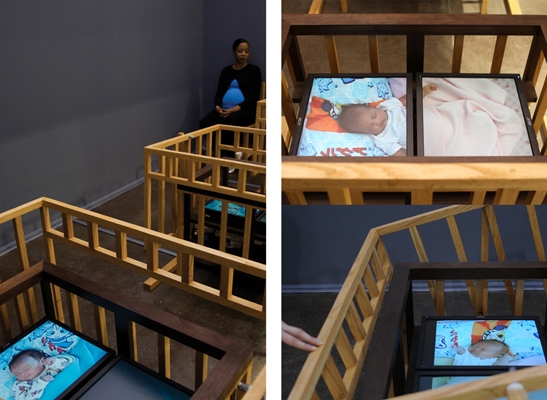 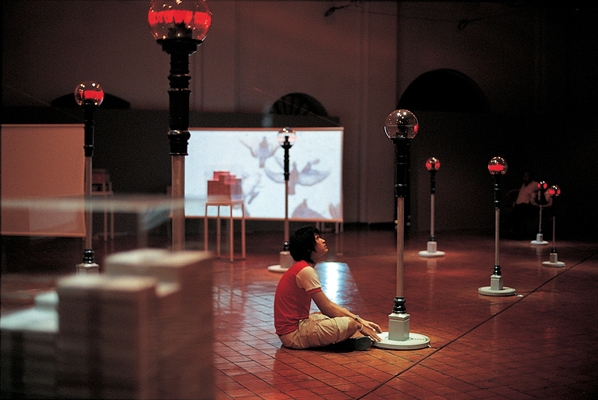 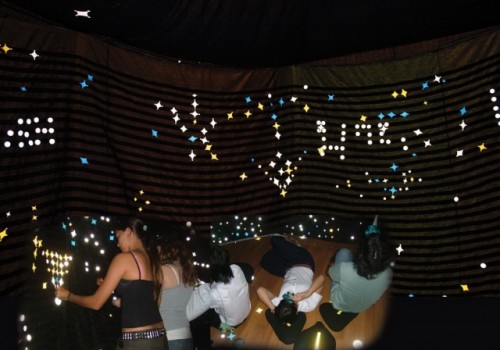 Felisia Tandiono is interested in observing sensory experiences. By inserting small interventions, she questions various processes in cultural production and constructs. Encouraging public interactions, her work strives to reveal a new outline of the possible: an emancipative act reacting from the dominant art system that affects social order in urban settings. Through conversations in the context of language, history, socio-cultural anthropology, science and technology, her work explores the relationship between perception and natural phenomena. By engaging human’s senses, she seeks further understandings of human’s data processing and mapping systems.

Felisia Tandiono (born in 1981 in Jakarta) is based in New York. She studied at New York University in the interactive design graduate program and graduated from the International Center of Photography in 2009. She holds a BA from Emerson College. Her individual work has been exhibited at Columbia University, Center for Performance Research, Museum of Art and Design, Camera Club New York, Jamaica Center for Arts and Learning, X-Initiative and the International Center of Photography. She has exhibited as a collective at the Bronx River Art Center, Dumbo Arts Festival and Lower Manhattan Cultural Council. She was a fellow at Jamaica Center for Arts and a resident artist at Lower Manhattan Cultural Council. 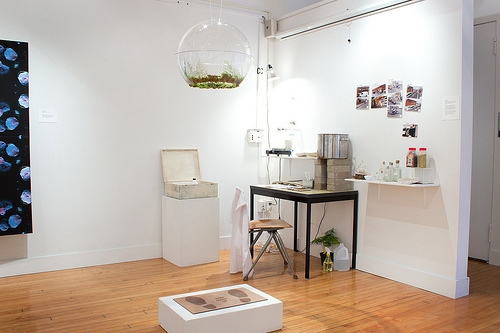 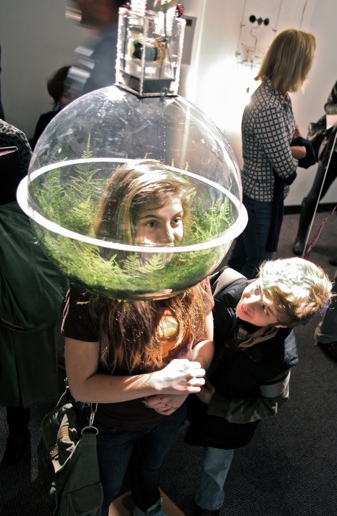 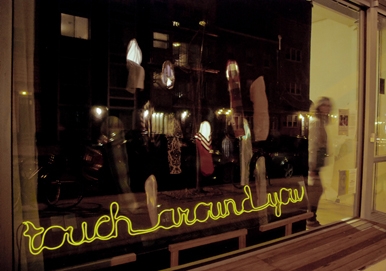 Felisia Tandiono, Touch Around You, 2012, Mixed media. Courtesy of the artist. 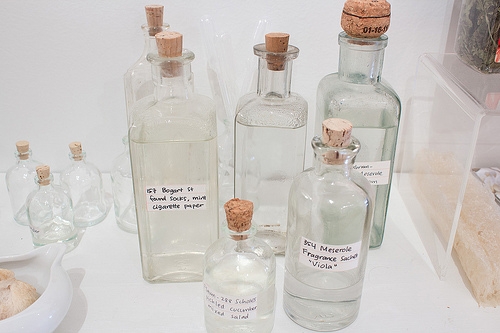 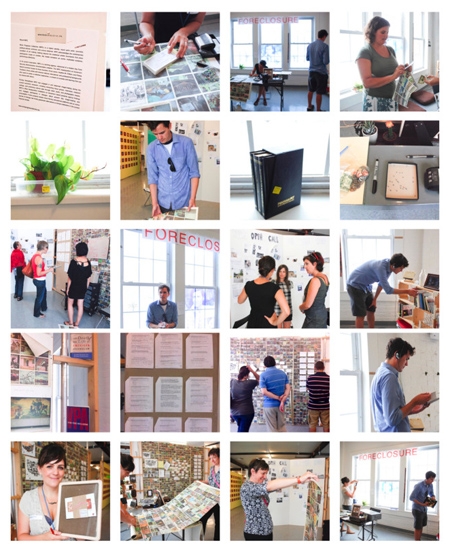 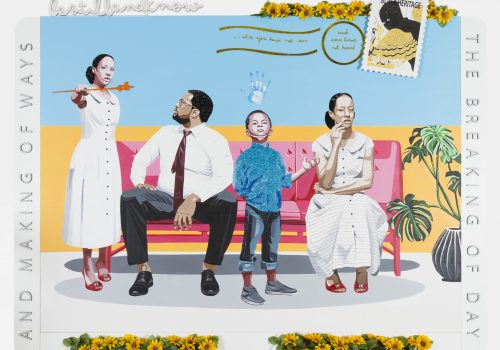